Celebs serve dinner to the homeless in Soho 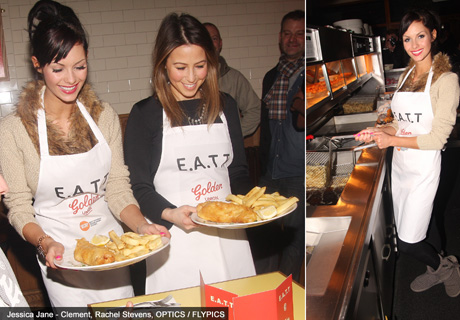 Celebrities Rachel Stevens ‘S-Club7’ and Jessica Jane-Clement ‘The real Hustle’ swapped the bright lights of Mayfair for the back-streets of Soho when they elected to serve up fish and chips to homeless youngsters in London. 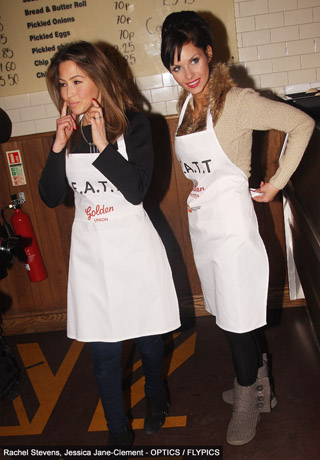 EATT, (Eat At The Table), made it possible for homeless young people who are amongst some of the most vulnerable members of society to come and tuck into delicious, warm fish and chips served up by the celebs at the Golden Union restaurant. The opportunity arose through a collaboration with homeless charity Centre Point.

Youngsters Keiran and Mark (Pictured) told Flyer News: “It was great to see the celebs today, they were so down to earth and very chatty.” 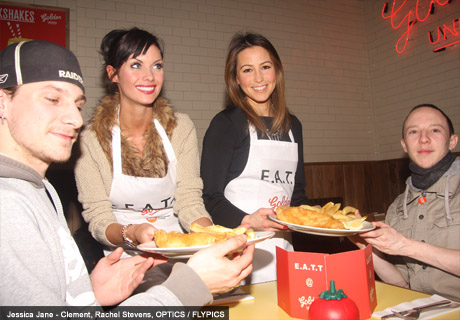 Head of fundraising at Centrepoint , John Raynham said: “We are really excited to be part of this project for the third time. Homeless young people are like anyone else. Centrepoint support over 1,200 16-25 year old every year and though they may have had a tougher time than others, they deserve to be treated with the same respect. Eat At The Table does this and looks to spread good will past the festive season.” 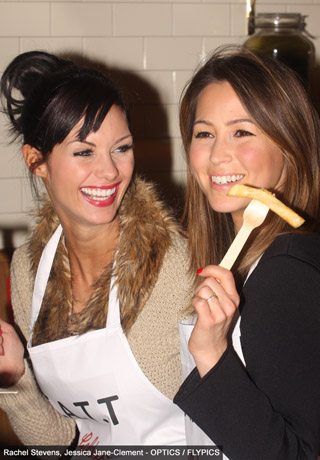 “EATT was one of our most popular events last year, and one that really made a difference to the community around us. We’re so pleased to be able to give the homeless a chance to dine at the table again, especially during this cold winter,” noted Kerry, co-owner of Golden Union. 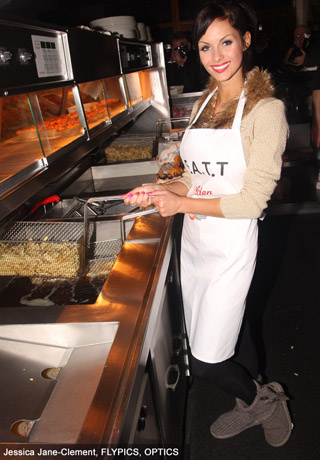 According to recent stats, more than 80,000 young people experienced homelessness in 2011, a rise of 15 percent, and with youth unemployment at a record high of more than one million, the need to support them is now greater than ever. Since it was founded in Soho in 1969, Centrepoint has been committed to ending youth homelessness, not only by providing a safe place to stay, but also the skills and support young people need to turn their lives around. 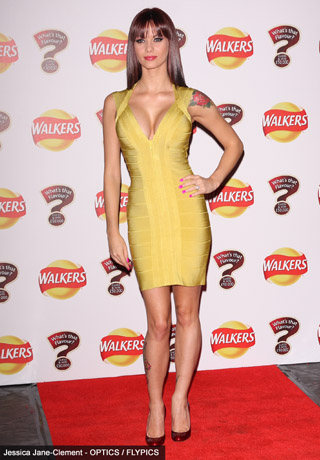 Last month we snapped Jessica Jane at the Walkers crisps launch in London. 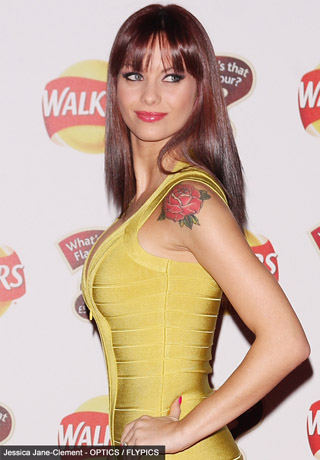 Golden Union is located at 38 Poland Street in Soho, and offers traditional favourites such as fish chips, pies, fishcakes and sides, all cooked tom order.

Model Louise Glover was spotted at the Star Wars 3D screening at the Empire in London. 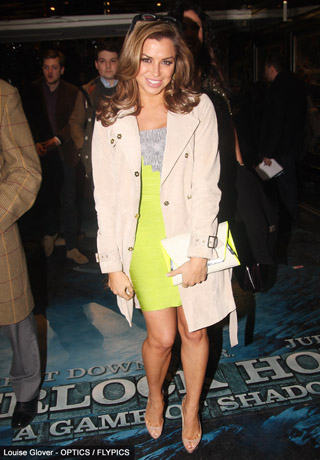 Louise who was also celebrating her Birthday went to the Mayfair Hotel and was joined by TV’s Desperate Scouse Wives star Leyla Flaherty. 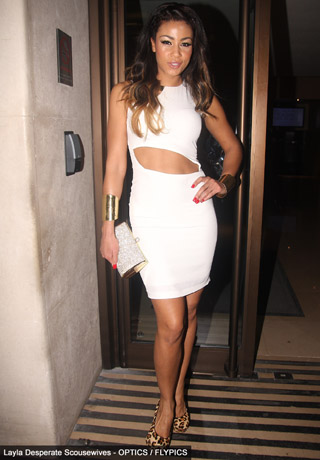 Leyla and her entourage walked to Aura nightclub to celebrate Louise’s party. 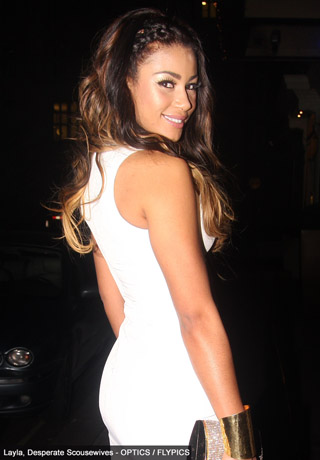 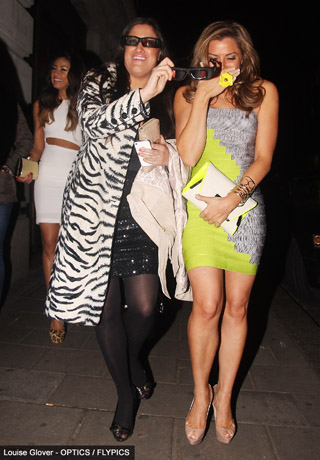 Over in central London Kanye West was playing cat ‘n’ mouse with the paparazzi.

Arriving via main entrance Kanye West was spotted by half a dozen paparazzi that were waiting for Eliza Doolittle. According to reports Kanye took a side entrance by which time they were being followed by the paparazzo. Kanye raced in through a side entrance turning his head to the blind side to avoid being snapped. 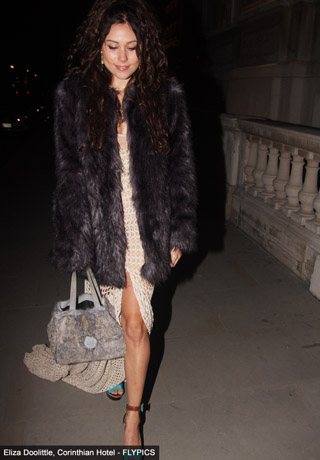 On exiting the Corinthian Hotel Kanye took to the underground car park and although we can’t say for certain whether Kanye was in this car however a mystery brunette was clearly not wanting to be seen either. 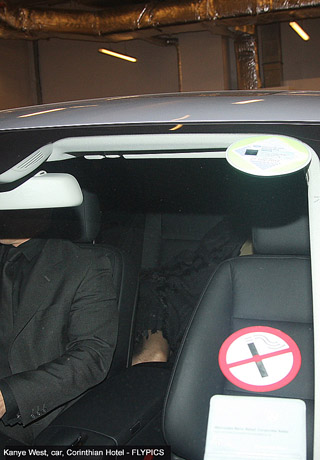 The mystery women appears to be hiding under a blanket with the ‘other’ passenger.

Last month Kanye’s security struck a deal with the paparazzi to avoid people getting crushed at the Lebron Nightclub in London. 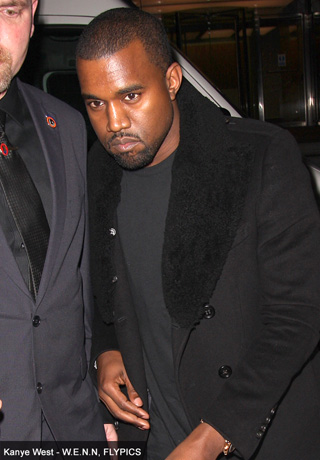 Other guests included Roc Nations Rita Ora (Rita Sahatciu Ora). Hotel security confused Rita for Amber Le bon and rushed to shelter the vocalist from the paparrazzi which reportedly caused much friction between the hotel staff and the press. 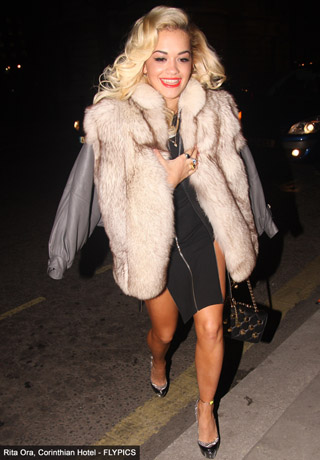