Playboy models strip off for PETA 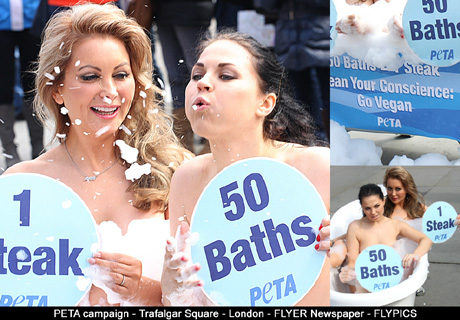 Temperatures were soaring in Trafalgar Square today as two Playboy models stripped down to their underwear in support of PETA. The bathing beauties, Monica Harris and Victoria Eisermann – who are both vegetarians – shared a bath full of water to mark World Water Day. 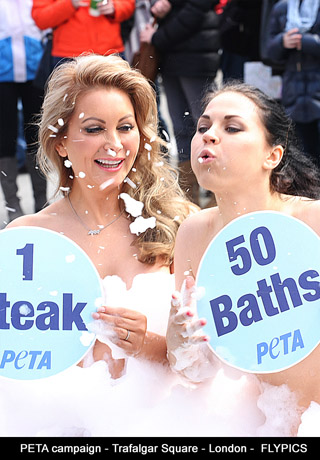 The action organised by PETA was to demonstrate that the best way to fight the worldwide water crises is to clense their conscious and go Vegan.

“Not only is the meat industry cruel, it also wastes huge amounts of water and damages the planet,” said Victoria Eisermann, who was voted Europe’s Sexiest Vegetarian by PETA in 2007. “You can’t eat meat and be an environmentalist.” Victoria exclaimed. 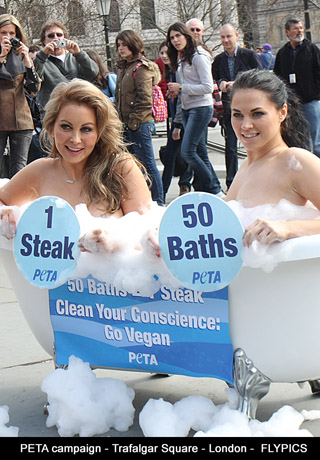 It takes about 15,500 litres of water to produce 1 kilogram of beef, compared with just 1,000 litres to produce 1 kilogram of wheat. A recent UN report found that the meat industry is “one of the top two or three most significant contributors to the most serious environmental problems, at every scale from local to global”. Among these environmental problems is freshwater scarcity, and the report calls for livestock sector “a key player in increasing water use” and “probably the largest sectoral source of water pollution”.

Vegetarians and Vegans are, on average, significantly trimmer than meat eaters, and less likely to suffer from heart disease, cancer, strokes and diabetes. Billions of animals raised for food each year endure routine abuse on crowded unhygienic farms. Some of them are subjected to painful mutilations and face terrifying deaths.